The White Bellied Sea Eagle, also known as the White Breasted Sea Eagle, is mainly found near coastline as their name suggests. They are normally found in pairs and live close to water ways. The Eagle is found in many parts of Australia and numerous folk tales have been there about this beautiful bird. This is Australia’s second largest Bird of Prey. They are giant sized kites.

This Sea Eagle is large and huge.

Color:  The White Bellied Sea Eagle has a combination of white and dark grey color on its body. It has white color on the head, rump and under parts. Its back and wings are dark grey colored. The large hooked bill is grey with dark tip and the eyes are dark brown in color. The legs and feet are creamy white and they have black talons. These birds have dark colored tails with a whitish tip. The irides are dark brown and the cere is lead grey. 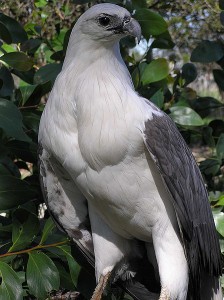 The White Bellied Sea Eagles are found in Australia, New Guinea, Indonesia and South East Asia. In India they are found in Northern parts of Gujarat and also the Lakshwadeep Islands. Not only India but many Asian Countries like Bangladesh, Sri Lanka, Burma, Thailand, Malaysia and Indonesia are inhabited by the Sea Eagle.

The White Bellied Sea Eagle is usually seen perched high in a tree or flying over the waterways and adjacent land. Birds form permanent pairs. They are mostly seen in coastal areas. They are generally territorial, though it may travel to various other places as well. Their range usually varies around 130 sq kilometers and is often shared with other Sea Eagle Pairs for hunting. Each bird nests within a couple of kilometers.

The White Bellied Sea Eagles have some unique behavioral patterns. 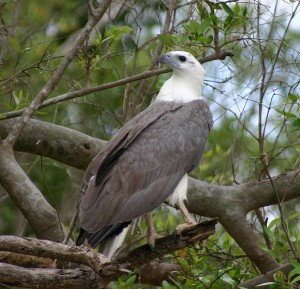 They have typical loud “goose-like” honking calls, which are heard mainly during the breeding season.

The Sea Eagles are very fond of fish and so they often glide downwards to catch their prey. Many types of fish, rats and lizards are eaten by these eagles. Sea eagles are often found scavenging around inshore fishing boats. They generally glide and attack the fishes.

It is fond of fish, turtles and sea snakes. It flies over water bodies and grabs its prey with the help of its talon. They are also known to eat birds, small mammals and reptiles and dead carcasses along the edge of water. At times they attack the small birds, to snatch their prey. It is attacking by nature and can attack its prey up to the size of a swan. They generally feed in pairs or in family groups.

During winter or summer in Australia one or two eggs are laid in a nest which is made out of an outer skin of sticks. Old nests are renovated prior to the laying of eggs.  The Sea Eagles generally choose tall trees or man-made pylons for nesting. If there are no trees then there are no predators of their eggs, hence nests can be found in shrubs and on rocky areas.

Hatching takes 40-44 days, but often the first to hatch kills the other eggs and hatchlings. White Bellied Sea Eagles begin to breed from 5 years and can live up to 30 years. The eggs are usually oval shaped and dull in color and of 55 centimeters. The female mostly carries out the incubation but the male also takes part in the process.

Nestling period is of about 95 days. The chicks are covered in white but it turns to brown. The male eagle brings food and the female feeds the chick, but both parents feed the baby as it grows older. 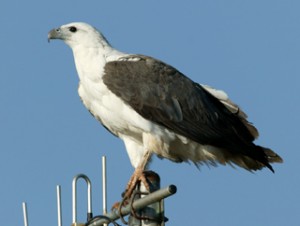 The White Bellied Sea Eagles usually live up to thirty years of age.

The White Bellied Sea Eagle falls under the “least concern” category of IUCN.

Some of the interesting facts of the White Bellied Sea Eagle are given below.

Here are some of the spectacular pictures of the White Bellied Sea Eagle. 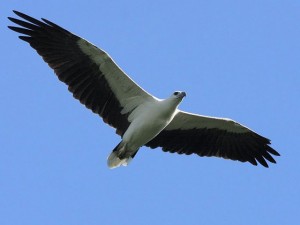 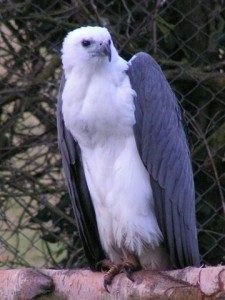