The scientific name for this species of tortoise is “Pseudemydura umbrina”.

Here is a brief description of the Western Swamp Tortoises.

Length: The length of an adult male does not exceed 155 mm. The females are smaller, around 135 mm. The carapace length of the hatchlings is somewhere around 24 to 29 mm.

Weight: Adult males weigh around 550 grams and the females are around 410 grams. The hatchlings weigh between 3.2 grams and 6.6 grams.

Color: The color of Western swamp tortoise varies with age and their surrounding environment. The hatchlings are generally black and bright cream below and grey above. The adults can have a black body with a slightly maroon tinge in black coffee-colored waters of the sandy swamps, or have medium yellowish-brown bodies in clay swamps. The plastron color may also vary greatly, from being brown and yellow to being an occasional black. There can also be black spots over a yellow background with black-colored edges to the tortoise’s scutes.

Legs: The short legs are adorned with scale-like scutes. The feet of these tortoises are webbed and equipped with well-developed claws.

Head: A large-sized single scute adorns the tip of this turtle’s head. They have a permanent grin-like expression on their faces and have small growths below their chins known as barbells.

Carapace: The flattened carapace has a square-like appearance from the above.

The main behavioral traits of the Western swamp tortoises have been described below:

The Western swamp turtle is mostly restricted to parts of the Western Australia, along the Swan Coastal Plain, in Twin Swamps and Ellen Brook areas of Perth’s outer metropolitan localities.

They only live in shallow, swampy areas that fill in during the seasons of winter and spring. These swamps generally occur on areas having clay soils or sandy clay soil deposits. During the summer and autumn months, they aestivate under leaf litters and in holes.

A number of predating species prey on these tortoises and have significantly contributed in the decline of their numbers. These include foxes, feral cats, dogs, rats, goannas, crows, as well as birds of prey.

These tortoises generally mate in the month of September.

After mating, the females will build a nest by digging a hole in the ground using her two front legs. In the months of November and December, she will lay a clutch of 3 to 5 hard-shelled eggs and cover them with grasses, leaves and soil. The eggs are incubated by the female for 6 months. Eggs will remain in the nest during the summer months. The hatchlings will start emerging in the following winter.

The young hatchlings take time to grow and require 10 to 15 years to reach sexual maturity. The male and female tortoises do not handle any additional parental responsibilities other than laying the eggs and incubating them. The rate of growth may vary, depending on the rainfall, temperature and availability of food.

These turtles are active for only half of the year, and spend the hot and dry months in a state of dormancy that is known as aestivation. The swamps start to be filling up with water around the months of June and July; during this time they come out and start foraging on earthworms and insect larvae. With increasing temperature conditions, they put on excess fats to prepare for the forthcoming periods of dormancy. The swamps are nearly entirely dried up by November and the turtles come out of the water to start their aestivation process. They do not eat anything during their aestivation months.

These turtles live for nearly 60 to 70 years in the wild.

Extensive captive breeding plans have been developed by the Perth Zoo and the Adelaide Zoo to increase the numbers of these tortoises. In these zoos, they are fed a wholesome diet consisting of beef heart, squid, blended prawns, fishes, carrots, vitamin supplements, algae powder, protein as well as calcium carbonate in gelatin. The hatchlings are fed a live diet that is comprised of backswimmers, brine shrimps, and mosquito larvae during the 1st year of their development. Careful management and execution of captive breeding plans have proved successful in increasing their numbers over the last few decades. Every year, some more tortoise individuals are introduced into the wild by the zoo authorities.

For more than 100 years, this species of turtles was believed to be extinct. Then in 1953, a schoolboy from Perth located a live specimen along the Upper Swan areas. More turtles were then found along the Ellen Brook and Twin Swamps localities. Their numbers were greatly threatened in the past by predation from wild species, bushfires as well as drainage of swamps for the purpose of agriculture. Major governmental strategies have now been developed to conserve these turtles, which include habitat management, captive breeding as well as translocations. Although their numbers have increased in the recent decades, it is still significantly low. Till date, the Western swamp turtle has been listed under the category of “Critically Endangered” by the IUCN.

Check out the most interesting facts about these turtles:

Here are some pictures of these adorable tortoises in their wild habitat. 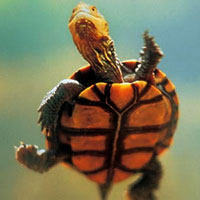 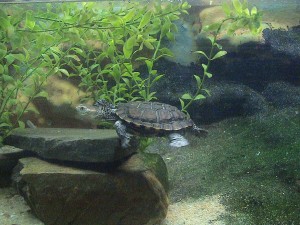 One reply on “Western Swamp Tortoise”

THIS IS A COOL SITE