Turtle Frog is a unique looking frog which is native to the western part of Australia. It is characterized by its peculiar body which looks like a small turtle without its shell. Mainly found in the semi-arid region, these frogs, unlike the other frogs, have short and muscular limbs. The strong limbs help them dig into the ground. One behavior which separates it from the rest of the frog is that unlike the other frogs, they dig forward like a turtle rather than backwards.

Turtle frog is a peculiar frog which resembles a small turtle without a carapace. These frogs are very small and have an average length of about 2 inches (5cm). Their back is shiny and smooth with fine granules. Their belly is dirty white with brown flecks. They have round body with small head and tiny eyes. Unlike the other frogs, they have short but muscular limbs which helps them to dig the sand. The color of its back varies from light pink to deep brown.

Turtle frogs are found in semi arid environment. They inhabit the open woodlands, places of leached grey sand and dense scrubs in sand hills. Their habitat is generally associated with termite colonies as they feed on termites. They hide under logs and stay underground most of the time. They emerge to the surface after the rain.

Mating occurs after a heavy rain when the turtle frogs come up to the surface. The mating call of the turtle frog varies regionally. Once they choose their partner, they retire to their burrow.

A clutch of 15 to 40 eggs are laid. Turtle frog eggs have an average diameter of 6mm and are one of the biggest eggs laid among the Australian frogs.

The species of Turtle Frog do not have a tadpole stage; instead it develops fully inside the egg. The hatchlings are small fully developed frogs.

Their mating call is a deep croak from their burrow. 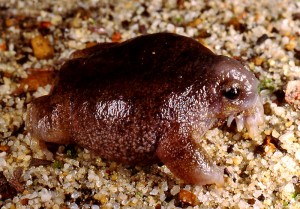 Turtle frogs feed on termites and therefore they are found at the termite colonies.

Turtle frog is not considered an endangered species and its population has remained stable. There is no threat that has been considered to this species as it occurs in an area secluded from human disturbances.

The possibility of any threat of the species would be due to the following:

Here are some of the pictures of this unique frog. 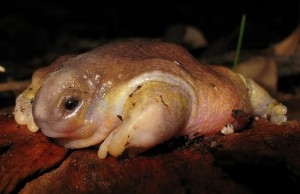 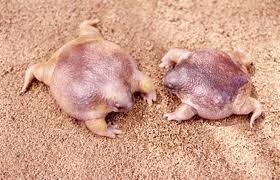