The Sulphur Crested Cockatoo is a large white cockatoo bird found in various parts of Australia as well as in New Guinea. They are quite popular as pets and make delightful companions.

The scientific name for these species of cockatoo is “Cacatua galerita”.

Length: Sulphur Crested Cockatoos have a length of around 45 to 55 centimeters. The birds of Australian mainland are larger in size than the ones found in New Guinea or other nearby islands.

Eyes: The eyes are enclosed within a white eye ring. The eye color is different for both sexes; black for the male birds and reddish-brown or burgundy red in case of the females.

Color: These birds have an overall white plumage with yellow crest, underwing and tail.

Bill: The bill is sharply curved and black in color.

Legs: The legs have four digits and are grayish in color.

Sulphur Crested Cockatoos are found in many locations throughout Australia, including Tasmania, Adelaide, Brisbane, Canberra, Melbourne and Sydney. They also occur in Papua New Guinea, New Britain, Milne Bay, Cenderawasih Bay and New Guinea as well as on Indonesian islands like Aru, Misool and Waigeo.

These birds like to hang around in the open countryside as well as on woodlands, farmlands and lowland forests.

Sulphur Crested Cockatoos do not migrate. However, some seasonal movements within specific locations have been reported. They might move from one place to another in search of food. 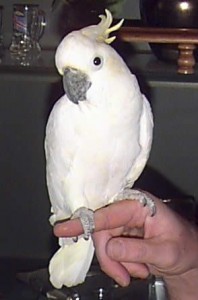 Here are some common behavioral traits of these birds.

These birds frequently make high-pitched screeching noises that are meant to traverse long distances through tropical and subtropical forest environments. They make loud and incessant grating calls during evening when they return home to their nests. They are also capable to imitate various sounds such as human speech, other animal noises as well as mechanical sounds.

These birds have an uneven wing beat action while flying. They can fly at a speed of around 70 kilometers in an hour.

Large kites and snakes are the major predators of Sulphur Crested Cockatoos.

These birds have developed certain adaptations to protect themselves from predators as well as consume their food in a more efficient way.

The breeding season for these birds last from August to January in south-eastern Australia and from the months of May to September up in the northern areas. 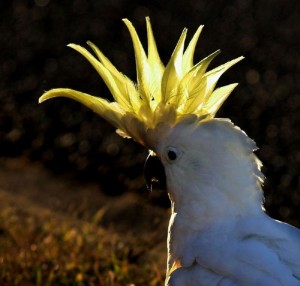 The males fight among each other for the attention of the females. During courtship, the male will approach a female with extended wings, widely spread tail feathers and an erect crest. He will also nod his head up and down and swing side to side while producing a low chuckling sound.

Once the two birds have formed a connection, they will preen and scratch each other’s bodies as a means to strengthen their bond. During the mating act, the male bird will mount his female partner. The actual mating takes place by joining of the male and female cloacae. After the birds have developed a close bond, they will leave the group and search for a suitable tree to build their nest.

These birds like to nest in hollow spaces of eucalyptus trees close to a water body. They may also build their nests in tall cliffs and haystacks. The nests are built at a height of 5 to 30 meters above ground.

The female lays a clutch of two to three oval white-colored eggs which are incubated by both the parents for about a month.

The babies are born hairless with their eyes closed. The parents feed regurgitated food to the young ones. The chicks are weaned by both their parents for about 3 months after which they fledge. It takes one more month for them to become fully independent. The young birds stay with their parents for several months after fledging. The young birds reach sexual maturity when they are about 5 to 7 years old.

Sulphur Crested Cockatoos are monogamous and develop a close bond with their partner that lasts for a lifetime. Separation from their partner might cause them depression.

Sulphur Crested Cockatoos are prone to suffer from a viral disease called Psittacine Beak and Feather Disease. This causes the birds to develop misshapen beaks and lose their feathers. They have also been known to be affected by the protozoon Haemoproteus and the malaria parasite Plasmodium.

Sulphur Crested Cockatoo can live for nearly 20 to 40 years in the wild. In captivity, they are known to live for about 70 to 100 years.

There are four known subspecies of Sulphur Crested Cockatoo.

If you want to pet a Sulfur Crested Cockatoo, make sure that you can spend enough time with them as these birds are very social and love to interact with other birds and humans. They enjoy sharing care and affection, without which they would not thrive.

Housing: The cage where you keep your pets cockatoos should have enough room as these birds are physically very active and love to flap their wings and stretch themselves. The minimum dimension of the cage should be 2 feet x 2 feet x 3 feet for a single bird. For more than one bird, a larger cage is required. Place the cage in a sunny area. You can also provide them with a perch to sit on along with requisite food and water.

Feeding: Provide your pet with a healthy diet of seeds, fruits, vegetables and occasional crickets. You can also prepare a tasty and nutritious dish for them combining oats, water and honey. The drinking water should be changed every day.

Caring: Bathe your cockatoo once a week with lukewarm water. Don’t rush while trying to bond with your pet. Take time to get to know your bird and allow it time to get to know you as well. Regularly preen the feathers to avoid growth of itchy spots. Trim your bird’s nails to avoid overgrowth of nails. Your cockatoo will try to chew anything it can grasp with its beak. So avoid keeping any plastic materials or sharp objects nearby.

Sulphur Crested Cockatoo is listed in the category of “Least Concern” by the IUCN.

Here are some interesting facts about these cockatoos.

Here are some images of these playful cockatoos. 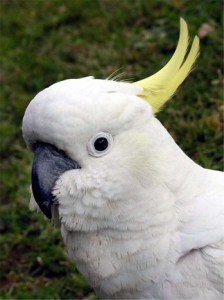 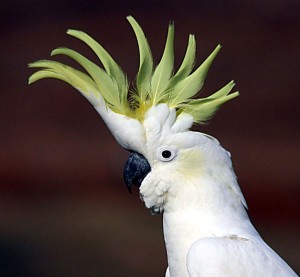