The saltwater crocodile is the largest living reptile species of all. This opportunistic, adaptable and formidable apex predator can be found across a wide range from the northern parts of Australia through South-east Asia and the eastern coasts of India. It is also known as Indo-Pacific and Estuarine crocodile.

The scientific name for these species of crocodile is “Crocodylus porosus”.

Here is a brief description of the physical features of these crocodiles.

Size: The saltwater crocodile can reach to a length of 8 to 10 meters but usually they are around 5 to 7 meters long. The females are smaller in size than the males, generally reaching up to a length around 2.5 to 3 meters. 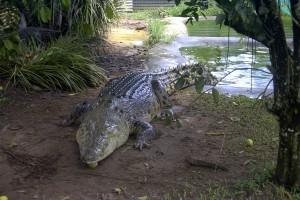 Weight: Their average weight varies between 1000 and 1500 pounds.

Head: These crocodiles have relatively large heads. A pair of ridges run from their eyes along the middle portion of the snout. They also possess strong jaws and sharp, peg-like teeth that are built for hunting and preying.

Color: The adults are normally dark colored. They have lightly tanned or grey areas around the lower flanks with dark stripes. The underside is white or creamy yellow which becomes grey as the tail approaches. The juveniles are generally pale tan in color with black spots as well as stripes along their bodies and tails. These black stripes and marks fade slowly with age, although they never disappear entirely.

Feet: Saltwater crocodiles have four toes in their feet. Their hind feet are webbed.

Tail: These crocodiles have long and powerful tails. 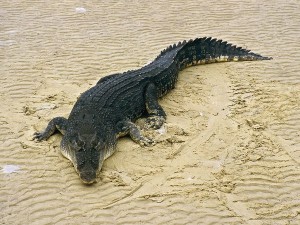 Here are some of the common behavior patterns of these massive reptiles:

Saltwater crocodiles are carnivorous and lead the food chain. Sometimes they may jump above water to catch an overhanging prey. They crush and swallow a smaller prey, immediately. They drag a larger prey deeper under water before tearing it into pieces and consuming it.

They can survive on rather small quantities of food for a long period. Juvenile crocodiles will restrict their diet to smaller animals like insects, crustaceans, amphibians, smaller reptiles, and fishes. However smaller aquatic preys, especially fishes are still included in diet even by the adults. Larger crocodiles can include different types of animals like water birds, wallabies, kangaroos, sea turtles, crabs, monkeys, dingoes, wild boars, turtles, snakes, birds, guannas, gaurs, flying foxes, water buffaloes, bats, sharks, humans, pets, carrion and domestic livestock. They can dominate other crocodiles and eat them.

The saltwater crocodile is found throughout Australia. Western Australia, Queensland, Northern Territory, in multiple river systems like Adelaide, Daly and Mary Rivers close to Darwin, in New Guinea are their homelands. Bismarck Archipelago, Kai Islands, Aru Islands, and the Maluku Islands also come under their home zone. It is also found in some parts of India, including the Sundarbans and Orissa’s Bhitarkanika Wildlife Sanctuary.

They have become almost extinct in the South Eastern Asia as well as Komodo, Lombok and Java. There is however, a stable population of saltwater crocodiles in Irrawaddy Delta that comprises of several large adults. Sporadic populations can be found in Malaysia and Indonesia. They have also been found in areas such as Fiji, Iwo Jima, New Caledonia and in the Sea of Japan. 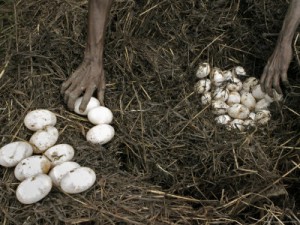 Saltwater crocodiles love spending most of the tropical wet seasons in freshwater rivers and swamps. They move to estuaries during the dry season or travel far out to the sea. They are also found in the brackish water of mangrove-lined tidal rivers, creeks, lagoons and billabongs. Saltwater crocodiles have been found in sea waters having full-strength salinity of 35% to waters where the salinity is twice, close to 70%.

The adult ones do not face any danger of predation. However, confrontation with other apex predators like tiger might lead to their death. Feral pigs and goannas are known to consume crocodile eggs. Baby saltwater crocodiles may face danger from monitor lizards, predatory fishes, leopards, tigers, larger crocodiles as well as various raptorial and aquatic birds.

Here are some of the important adaptive features of the Saltwater crocodiles:

The Indo-Pacific crocodile breeds during the wet or rainy season. 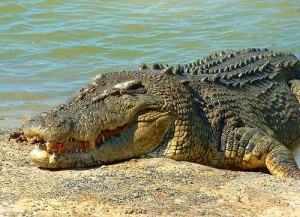 The courtship season for saltwater crocodile lasts from September to October. Their nesting commences between the months of November and March. Breeding territories are generally established along freshwater areas or tidal rivers. During courtship, they rub their bodies and heads together. The act of mating is performed in water.

The nest is formed as a mound with mud and different types of vegetations. It is around 53 centimeters in height and 175 centimeters in length. The female lays about 40 to 60 eggs in this nest, sometimes the number of eggs can go up to 90. It takes an hour to lay the eggs. The eggs measure around 80 mm /50 mm and weigh approximately 113 grams. The eggs are incubated for about 80 to 98 days.

The eggs need to be protected from getting submerged under water otherwise the embryos will eventually die due to lack of oxygen. Throughout the incubating period, the female stays close to the eggs and defends them vigorously against any probable threats.

Once the eggs hatch and the hatchlings start coming out they produce characteristic sounds that tell the female to start digging open the nest. The mother will use her mouth to carry the new born ones to water and gently break open the unhatched eggs. The hatchlings measure 29 centimeters in length and weigh roughly 72 grams.

The embryos lack sex chromosomes and the sex of the young ones is determined by temperature. Low temperatures produce mostly females, while higher temperatures produce males. The juveniles and the mother will interact with each other by making acoustic calls. The young ones will start to separate at about 8 months of age. They begin their territorial behavior when they are about 2.5 years old. The female crocodiles become ready to mate at around 12-14 years of age and the males reach sexual maturity at around 16-17 years. Only around 1% of all the young ones reach maturity. 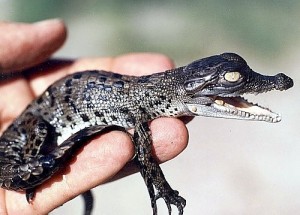 Saltwater crocodiles are long-living creatures. Many of them live well over 100 years.

These reptiles are reputed for their many attacks on humans. They can be held responsible for the death of about 400 Japanese soldiers at the time of Japanese retreat during the Battle of Ramree Island. Most of the attacks are more territorial in nature than predatory, but many of those attacks are not duly reported.

It is advisable to avoid their inhabiting zones. In 2011, a Bengal tiger was killed by a giant Saltwater crocodile as it was attempting to cross a river.

The saltwater crocodile is listed under the “Least Concern” category by IUCN.

Check out the various interesting facts about these crocodiles:

Here are some amazing images of Saltwater crocodiles. 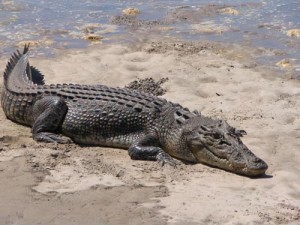