The Red-Bellied Black Snake is an elapid snake species native to the eastern parts of Australia. One of Australia’s most well-known snakes, it is frequently spotted by many adventurers in the urban forests and open areas of this part of the world.

Its scientific name is “Pseudechis porphyriacus”. 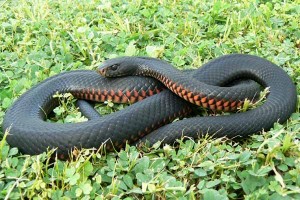 Length: Length of adults ranges between 1.5 meters and 2 meters.

Eyes: The eyes are medium-sized and are shadowed by a brow-ridge. The dark-colored iris is surrounded by round pupils.

Color: The dorsal parts of the head and body are glossy in color, with the snout having a lighter brown coloration. The underparts of the snake and the middle portion of the belly are red, pink, or crimson in color. In the northern ranges the ventral color might be white or grayish-pink. The tail’s underside is black.

Fangs: These snakes are front fanged like all other elapid snakes.

Sexual dimorphism: The males are slightly larger in size than the females.

They generally feed on frogs, tadpoles, lizards, fishes, eels, birds, rats, mice, some mammals as well as snakes, including that of their own species. While hunting underwater, they either swallow their prey wholly or take it to the surface before consumption.

These snakes are mostly found in various parts of Australia, such as Canberra, Brisbane, Cairns, Melbourne, Sydney, Queensland, Victoria, Adelaide and New South Wales. They have been predominantly spotted around Bacchus Marsh, Bayswater, Park Orchards, along Plenty River in South Morang area as well as around Merri Creek in Campbellfield to the Somerton area.

These snakes mostly reside in moist habitats, such as swamps, creeks, rivers, lagoons and streams, although they can also be found far away from these areas as well. They are also seen extensively in the forests, grasslands and woodlands. They also inhabit rural properties and disturbed areas, with people frequently encountering them around farm dams or drainage canals. They commonly take shelter in logs, thick grass clumps, mammal burrows, dreys as well as under large rocks.

Feral cats are the only known predators of the adult red-bellied black snakes. However, they might also fall prey to the brown falcons as well as other raptor birds. Juveniles and newborn snakes face danger from smaller carnivorous birds such as kookaburras, frogs, other snakes and also from certain invertebrates like red-backed spiders. They are especially vulnerable to the toxins of Cane Toads which might kill them if they accidentally ingest or mouth these amphibians.

Like all snakes, they generally hibernate in underground caverns and holes during winter months. However, in some cases they can be spotted outside their general habitat zones.

The venom of these snakes consists of myotoxins, neurotoxins and coagulants. It also has haemolytic features. Although the red-bellied black snakes are highly venomous, bites from these snakes are rarely fatal as they generally choose to inject a very small amount of venom toxin. However, a person bitten by these snakes still require immediate medical attention. Antivenom derived from the tiger snake is used treat bites from these snakes. Although black snake Antivenom can be used as well, the tiger snake antivenom is generally administered at lower doses.

The mating season for this species of snakes is mostly during the spring season around the months of October and November, although sometimes they have been known to mate as early as the late winter months.

During the mating season, the males travel extensively in search for receptive females. They also engage in combats with rival males that they might encounter. When two rival males combat each other, they spread their necks, rear up their forebodies and intertwine their bodies together to create pressure. They also frequently hiss and bite each other during this struggle. This combat may go on for a few minutes to maybe several days. The snakes are so pre-occupied with their fights during these times that they hardly notice their immediate surroundings.

While courting a female, the male comes close and starts rubbing his chin over her body. As the ritual progresses, the male may even twitch excitedly and hiss or bite the female snake. If the female snake is receptive and curled, she will indicate her eagerness to mate by stretching her body out and then allowing the male snake to align his body with hers.

These snakes are ovoviviparous, i.e., they give birth to live young ones. In the wild, the females start developing yolking follicles during early spring and become gravid between mid-spring to late summer months. In certain areas, the gravid females gather in small clusters of up to six individuals nearing the end of their gestation periods. The females bask together and share the same night retreat. Although the exact reasons for such behaviors are unknown, it is believed that this allows for additional protection against predating species. During the late pregnancy months, the females don’t feed themselves and stay near their retreat. After a gestation period of 4 to 5 months, the female snake gives birth to 15 to 20 young ones (sometimes even more) who are born enclosed within a membranous sac.

The young snakes emerge from the membranous sac soon after their birth, although they can still remain inside for nearly 2 days. At birth, they measure around 28 centimeters in length. These snakes reach sexual maturity when they are about 2 to 3 years of age.

At the end of the breeding season, both sexes become much less active than they used to be during spring.

The life span of these snakes in the wild is 6 years.

There are 3 subspecies of the red-bellied back snake, namely

The IUCN Conservation Status of the Red-bellied Black Snake has not been evaluated yet.

Here are some images of these snakes in their wild habitats. 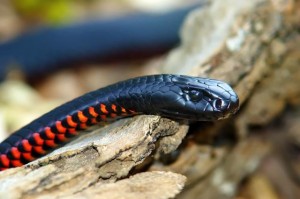 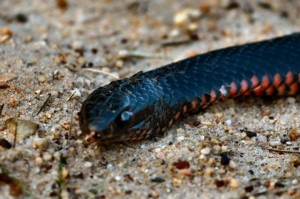