Rainbow lorikeet is a parrot with a dash of color on its feathers. It belongs to the Psittacidae family of the Lorini tribe. This bird is an Australian pride. With its smearing colorful beauty and sweet-naughty nature, this bird is a hot favorite amongst bird petting enthusiasts.

The Rainbow Lorikeet bears the scientific name of Trichoglossus haematodus.

A Rainbow Lorikeet is a mid-size parrot that is full of rainbow colors. Male and female lorikeets look similar.

Size: These birds are 25 to 30 centimeters long. The wing span is of 17 centimeters.

Weight: Average weight of rainbow lorikeets ranges from 75 to 157 grams.

Color: The head is a shade of deep blue. The left and right upper sides are deep green. The belly is usually deep green. The thighs and the buttocks are merged in yellow and deep green. Rainbow Lorikeets are hardly distinguishable in genders. The chest is blazing red with strokes of blue and black. 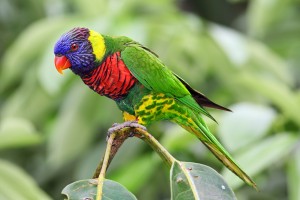 There are a wide range of rainbow lorikeet subspecies.

These parrots are Australian in origin. They are commonly found in the eastern shoreline stretching from Queensland to South Australia and northwest Tasmania. They are also found in eastern Indonesia (Maluku and Western New Guinea), Papua New Guinea, New Caledonia, Solomon Islands and Vanuatu.

This species of parrots are notorious for destroying fruit crops. However, the general diet of a Rainbow lorikeet comprises of nectars and pollen from flowers. These birds eat a wide range of fruits like apples and grapes. They also eat sunflower seed which is their most favorite food item, ripened grains and oats.

Wild Lorikeets residing at camping sites, open gardens and pastures often get close to humans. They tend to feed from hands.
Visitors in Australia are encouraged to feed Lorikeets with specially prepared nectars. 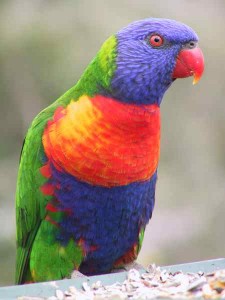 These birds are found to have a large number of behavioral attributes. Some of them are:

Rainbow Lorikeets call out loudly. They have a screeching nature of chattering and calling. While the inherent nature is to stick together in flocks, lorikeets swoop from trees calling out loudly to group membersInflatable Slides.

While flying, they give out continuous sharp screeching calls. While eating they continue with their shrill chatters. Even while resting, they can be heard giving out soft twitters.

These birds have swift and direct flights. A mild flapping sound is heard due to the continuous shallow beating of their wings. They fly very high in the skies. They travel very long distances while flying. While taking short flights, these chirpy birds twist and turn over and above trees. 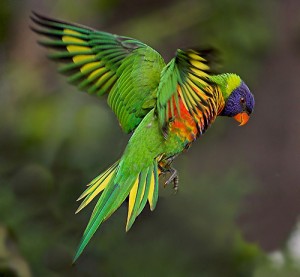 Lorikeets in Australia usually tend to breed during spring time (September to December). However, the time of breeding varies depending on climate and feeding conditions. This species prefer nesting in the hollow bark of trees. Usually they choose tall trees like eucalypts and places like palm trunks and overhanging rocks. A very strange nature of rainbow lorikeet breeding is that several pairs of Lorikeets nest together in a same tree.

Commonly there are 1 to 3 eggs. These are incubated within a span of 25 days. Only the females take the entire incubation responsibilities.

It takes around 60 days for a new born one to learn flying. The juveniles become independent after two weeks added to their fledging time.

These birds reach sexual maturity between 18 to 24 months.

A rainbow lorikeet is a strong bird which normally lives for 7 to 9 years. But there have been reports of long lives often ranging for 15 to 20 years.

As a pet they can live long depending upon the bird’s hygiene and care. They require clean environment in order to thrive.

A rainbow lorikeet is believed to be a fast learner and a regular dose of amusement. These parrots are extremely playful.

They can also be kept in aviaries that are 10 feet. Due to their aggressive behavior, these birds are usually kept as a single pair in an aviary.

These birds love having nectar. Wet and dry nectar can be mixed to make their food. There is great number of food available commercially. You can make your own recipe with baby cereals, rice flour, breadcrumbs, powdered glucose, skim milk powder, semolina (wheat hearts) and pollen mixture.

Fruits and vegetables can also be an important part of their daily diet. Iron-free food should be used as the birds are prone to health problems due to iron.

Find out some exciting facts about the bird:

Here are some incredible images of these birds known as Rainbow Lorikeet. 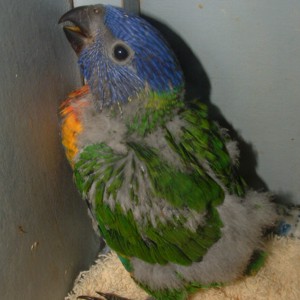 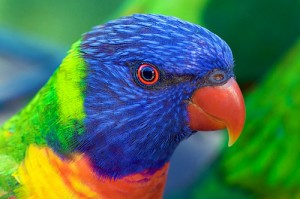 […] Some facts about the Australian Rainbow Lorikeet […]

In kilometres – What area do Rainbow Lorikeets cover
Daily.
We have many regulars in our garden- feeding daily on 4 types of Grevillea and 2 flowering Gum trees.
I love them & they get excited when they see or hear me in the house.I whistle back to them and they love the interaction.We leave water out but not food.

How far is the circumference of lorikeets daily territory.?