Platypus is one amongst the nature’s unlikely animal. They are the only mammal that lays eggs instead of giving birth to their young ones. They are native to the Eastern Australia and Tasmania. Platypus are semi aquatic mammals and are included as one of the extant species of monotremes. It belongs to the Ornithorhynchidae family and the platypus is the only living family member of its kind. The scientific name for Platypus is Ornithorhynchus anatinus, which is derived from Greek words, which means ‘duck like’ and ‘bird-snout’.

The Platypus is one amongst the three egg-laying mammals in the world. They are monotreme, which means that they urinate, reproduce and defecate through a single opening. Platypus has a broad and flat body. They have a duck shaped bill that is more elongated, which are moist and soft and has a leathery skin, which are very sensitive. They have tiny teeth at the back portion of the jaws though becomes toothless when grown mature. They have a fine dense fur that is waterproof; it insulates the air and keeps the platypus warm. The color of their fur varies, especially the male platypus. The color of their fur becomes darker as they mature. The male have darker fur, which are almost black than that of the female that has a reddish hue. The fur on their tail is coarser and brittle. 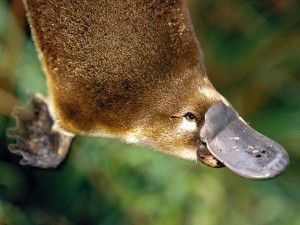 They have small eyes and do not have any external ears. Their eyes and their ears are folded inside the skin so that while diving inside the water, their eyes and their ears are closed by the fold that they become deaf and blind while submerging. Platypus has webbed feet with claws. The webbed front paws broaden inside the water acting like paddles and fold under the foot while walking on the land. Their strong claws help them to dig burrows. Platypus has foot at the sides of their body rather than underneath so they walk like reptiles. Male platypus is larger than the female with an average weight of around 0.7 to 2.4 kilograms. An average length of a full-grown male platypus would be around 20 inches and 17inches of females.

Platypus population occurs only in Tasmania, New South Wales and Queensland to the far north Cooktown and Victoria. However fossils found in Argentina proves that platypus was found in South America too about 60 million years ago when the Gondwanaland existed.

Platypus Taxonomy and the Origin of its Name

Platypus is an unlikely animal and when the European settlers first encountered it in 1798, their sketches and specimens were forwarded to the Britain. However scientist were perplexed too and found it unbelievable and thought that somebody might have sewn a duck’s bill on a beaver like animal or a freak imposture sold by the Chinese taxidermist. Finally after years of doubt, in 1802, an English scientist confirmed that the animal was not an attribute of hoax but a reality. 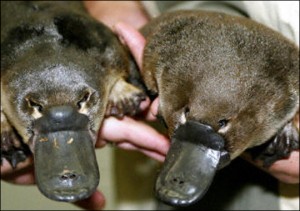 The name ‘Platypus’ was derived from a Latinization of Greek word. Later during the 1800s it was officially known as Ornithorhynchus anatinus derived from the Greek word ornithorhynkhos means “bird snout” and anatinus in Latin means, “duck like”.

Platypus shows no signs of evolution. Fossils found have proved that they degenerated over the period of time but there is no solid evidence of their evolution. Fossils of around 110 million old were found indicating that the platypus like animal existed during the Cretaceous period and those fossils were the oldest mammals fossils found in Australia. Fossils of the platypus relatives were found in Argentina that proves that they monotremes were present when the super continent Gondwanaland existed.

Platypus is shy animal and is mainly active before dawn and after dusk. They prefer fresh water lakes, ponds, edges of the river where it would be easier for the to dig their burrows. 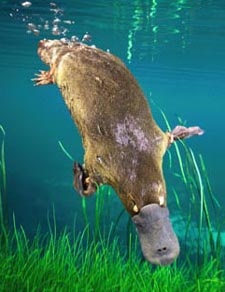 Platypus usually digs two types of burrows. The platypus as a living room usually uses one burrow. The female for breeding digs the other burrow, it acts as a nursery for the new born.

Platypus are semi aquatic, nocturnal animals. They are active before the dawn and after the dusk, but some are also seen during the day particularly when it’s overcast. They are good swimmers and they spent most of the time underwater hunting for food. They eat almost 20% of their body weight everyday, therefore are seen hunting for food almost 12 hours a day. Apart from hunting for food, they are seen drying themselves in front of their burrow. Platypus are endothermic and their body temperature are usually 32 degree Celsius. Their mortality rate in the wild is lower than the captive ones. Wild platypus live for almost 11 years protecting themselves against the predators whereas the captive ones may live up to 17 years.

Platypus feeds mostly on carnivorous diet that includes worms, fish eggs, mayflies, tadpoles, shrimps and insects. They feed mostly in the water and it’s amazing how they locate their prey with their eyes and ears closed. Their bill navigates and receives information to locate preys inside water. They eat a large quantity of food, almost 15% to 30% of their body weight each day. The tail of the platypus like the Tasmanian devils store fat at times when the female burrows to breed or at times of low food supply.

Both the male and the female platypus have ankle spurs but it sonly the male platypus that produces venom that can be fatal to small animals. On humans the venom has a very agonizing effect and the victim may feel deprived of any strength. The affected area swells and accumulates fluid and the pain last for weeks and months at times. The venom production increases during the breeding season. 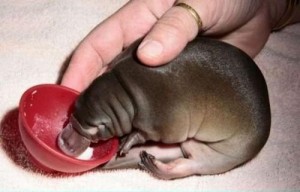 Platypus are unique mammals. They are one amongst the three mammals which lays eggs and feeds their young ones through a large gland that oozes out the milk covered up from a patch of fur since they do not have teat. The females become sexually active within 2 years but may wait for 5 years too. Breeding season occurs between June and October but varies according to the location. Records show that their mating season starts in August in Queensland and October in Tasmania. The female platypus builds a separate burrow as a nursery for the new born. The incubation period last for 10 to 12 days. They have a pair of ovaries but only the left ovary functions. They lay two to three leathery eggs and are rounder than those of the birds. The external incubation period last for another 10 days. The young platypus are born vulnerable. Female platypus does not have teats hence milk is feed through glands covered in fur from where the little ones suck milk. The young ones have teeth but soon lose it as they grow. The mother platypus takes care of her young ones for almost four month till the time they are able to swim on their own.

Some of the interesting facts about platypus are mentioned below: 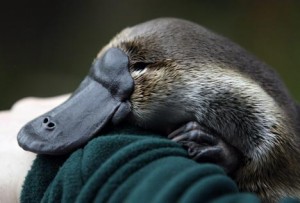 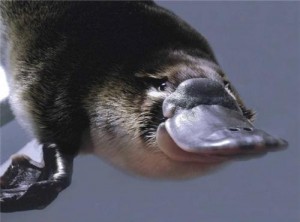 Platypus are one of the unique animal and are protected by law. They are not under immediate danger after several laws were passed to conserve the animal.

One reply on “Platypus”