Numbat is a marsupial belonging to the mammal family. It is an emblem of the Western Australia. The mammal looks very adorable and makes a great pet. Due to its endangered existence status it is protected and not much encouraged to be petted.

This adorable looking species is totally harmless and very cute.

Size: This species of mammals is usually 35 cm to 45 cm in length. This length is measured from its head to tail tip.

Body: Body of this animal resembles to that of a squirrel with the same pointed snout and upright ears.

Color: Color of this mammal varies considerably. The body color ranges from light grey to maroon, sometimes even brick red. Long, black stripes run through the face from the snout till the base of the ears. On the upper-side of the body there are about 4 to 11 stripes in white, fainting towards the middle of the back.

Underneath part of this mammal is cream-ish or light grey-ish in color. The tail is grey colored with white occasional flakes. 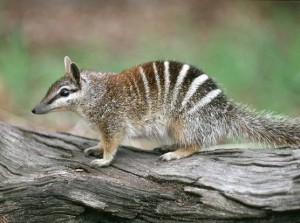 Eyes: Cone cells in the retina of the eyes of this species are comparatively dominant. It helps this creature to see better in bright daylight.

Mouth: This mammal has a narrow and long tongue. A coat of sticky saliva coats the tongue. A bunch of non-functional and very small teeth comprises most part of its upper jaw. Other functional teeth form a dental patter usually in the ratio of .

Limbs: This animal has 5 toes on forelimbs and 4 toes on hind limbs. The forelimbs are very powerful and claws are extraordinarily heavy.

Tail: The tail is almost as long as the body. It is covered with thick and long hair.

Weight: Weight of this creature is hugely variable. Some weigh around 280 gm and some weigh even upto 700 gm.

Find out the various interesting behavioral characteristics of this species.

This species are carnivorous in their diet habit. They survive on termites and ants. They locate some termite nest and flick their tongues out and the termites get stuck on the sticky tongues of Numbats. They eat around 20,000 termites each day.

Since the time of the European invasion population of this species have alarmingly decreased. The species could maintain their survival in parts of Peru Nature Reserve and Dryandra Woodlands in the Western Australia. Recently, Numbats have successfully restored their existence in some protected reserves of New South Wales and South Australia. 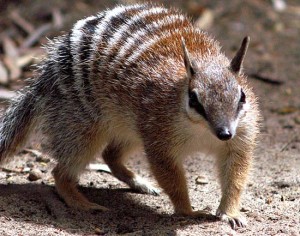 Open woodlands that are full of Eucalyptus are homes to these amazing creatures. They nest in hollow tree logs for shelter.

Natural predators in the wild of this amazing endangered species of mammals are Carpet pythons, Collard sparrowhawk, Brown goshawk and Little eagle.

This humble creature does not much adaptive features.

The Numbats mate during the months of February and March.

Gestation period of these mammals lasts for 12 days to 16 days.

The gestation period lasts around a fortnight. The Numbats do not have pouches, unlike other marsupials. During the lactation period the new born ones cling to a patch of golden hair on the mothers’ near abdomen region. 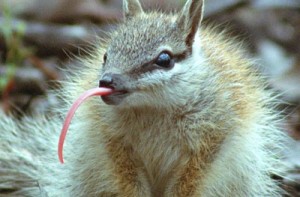 The new born Numbats are 2 cm in size, hairless and blind. They develop their first patch of hair when they have grown about 3 cm in size. They feed on their mothers’ milk till the age of 6 months.

The mother Numbats leave the young ones after 6 months and go out in search of food. The mothers return in the burrows to the nascent born one during nights to feed them. When the kids are about 7 months of age the mothers start carrying them on the back.

Lifespan in the wild of these adorable creatures is unknown. In captivity, they have been observed to have lived for about 5 years to 6 years.

Only two sub-species of this mammal have been discovered, namely M. f. fasciatus and M. f. rufus. The M.f. rufus sub-species is extinct by now.

In Western Autralia it is illegal to pet most of the exotic animals. Especially Numbats, being one of the endangered species, are absolutely illegal n punishable to pet.

This amazing species of mammals is listed as an endangered species by IUCN surveys. Main reason behind this species being endangered is the European red fox invasion in Australia.

Here are some of the most interesting facts about this amazing species.

Check out the pictures below and find out how this amazing animal looks. 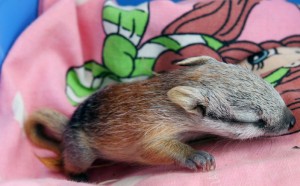 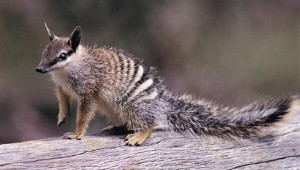