Lyrebirds are ground-dwelling birds that are native to Australia. They are known for their noteworthy mimicking abilities, unique tails and plumes as well as interesting courtship display.

There are two species of Lyrebirds that make up the genus “Menura” as well as the family “Menuridae”. They are namely:

Here is a brief description of the physical appearance of these birds: 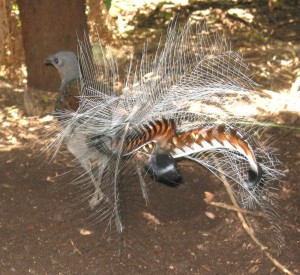 Length: The Superb Lyrebird is larger in size among the two species and resembles a large-sized brown pheasant. The males are between 80 cm and 100 cm long and the females are around 74 cm to 84 cm long. The Albert’s Lyrebird is somewhat smaller, with the average length for the males being around 90 cm and for the females around 84 cm.

Color: The wings have a rufous coloration. The feathers on top of these birds’ bodies are darkish brown in color whereas the underparts are much lighter. They have red or brown markings around their throat. The legs, feet and bill are black in color.

Tail: The adult male Superb Lyrebird has got an ornate tail comprised of 16 feathers; 2 lyrates, 2 medians as well as 12 filaments that are thrown over the head like a shimmering fan while on display. While not in display, the male bird holds its tail behind. The tail feathers of the female bird lack the elaborateness of the male and have got a long, dingy brown appearance. The lyrate feathers of the Albert’s Lyrebird are smaller in size and less magnificent than that of the Superb Lyrebird, but are otherwise similar.

Wings: The wings are short and rounded.

Lyrebirds are an interesting species both in terms of their appearance as well as their behavioral characteristics. Here are some of the main behavioral features of these birds:

Lyrebirds are quite awkward flyers. Their wings allow them to only glide for short distances and mostly help them to jump and run around.

Lyrebirds are notable songsters and impersonators. They can impersonate practically any sound they hear from their environment, including human sounds like mill whistles, chainsaws, fire alarms, car alarms, car engines, explosions, camera shutters, rifle-shots, crying babies, human voice and even music. They can also mimic the call of other birds and barking of dogs. They also have their distinctive own calls that are meant for other activities.

The Superb Lyrebird can be found in parts of south-east Queensland and Victoria, New South Wales, in Tasmania, in the Kinglake National Park and the Dandenong Ranges National Park, Victoria, Australia, in the Illawarra region located on the south of Sydney as well as in many other non-protected bushlands and parks located along the eastern coasts of Australia. Albert’s Lyrebirds are found only in some small portions of Southern Queensland’s rainforests.

They are found mostly in the rainforest regions of Australia.

The Lyrebirds have developed a number of adaptations that allow them to prey for food as well as help them to defend themselves from predators. Check out the distinctive adaptive features of these birds.

Lyrebirds mate mostly during the winter season, which is around the months of May to August.

During the breeding season, the male Superb Lyrebird will perform an elaborate courtship ritual to attract potential partners. He will use dirt to build up several high mounds that measures about 36 inches wide and around 6 inches high and use them as platforms to show off. He will attract several females and then mate with them. The Albert’s Lyrebird, on the other hand, only uses a pile of small twigs to build his courtship platform. The males have their own breeding territories which may include 7 to 8 females. Once mating is over, the female will build a dome-shaped nest that is low on the ground within a moist gully using sticks, twigs and leaves. She will then lay a blotchy, brown-colored egg and then incubate it for nearly 45 to 50 days.

The newly born chicks appear downy white in color and will stay with their mother for the next 6 to 10 weeks. During this time, the mother will take care of it and the father won’t play any role in rearing up the young. The females attain sexual maturity at around 5 to 6 years of age, whereas the males become mature at around 6 to 8 years.east inflatables

Lyrebirds can live up to 30 years in the wild.

Although the Superb Lyrebird has been classified by IUCN under the category of “Least Concern,” the population of Albert’s Lyrebird is critical and therefore these birds have been listed as “Near Threatened”.

Here are some interesting facts about these birds:

Check out the images of these attractive birds. 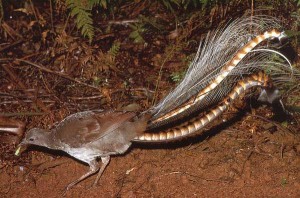