The Lumholtz tree kangaroo is a heavy-bodied species of tree kangaroo that is found mostly in the rainforests of Queensland. It gets its name from Norwegian explorer and naturalist Carl Sofus Lumholtz.

The scientific name for this species of tree kangaroo is “Dendrolagus lumholtzi”.

The Lumholtz tree kangaroo has an interesting appearance that is distinct from the other tree kangaroos. Here is a brief description of their physical features. 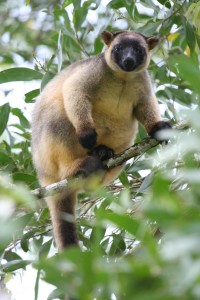 Arms: The forearms are long and muscular; they lack opposable thumbs.

Head: The head is round and small, consisting of a large snout. The face is covered with a patch of light-colored fur across the forehead and also along both sides of the face. They also have sharp teeth and rounded ears.

Feet: The hind feet are rather short and broad. The undersurface of the hind feet is developed into a soft pad-like structure. The front feet are composed of rough, bumpy underside pads and curved claws. The feet are black in color.

Color: The body of the Lumholtz tree kangaroo is covered with fur that is of blackish-brown coloration. It has a cream-colored chest. Its lower back side is light blackish-brown in color. Its toes and muzzle are black in color.

Tail: The Lumholtz tree kangaroo has a long, cylindrical, non-prehensile tail that is blackish-brown in color and tufted at the end. The tip of the tail is black in color.

The Lumholtz tree kangaroo’s behavioral patterns make an interesting study for the researchers. Here are the main characteristic traits of these tree-hoping marsupials.

These kangaroos are primarily leaf eaters who consume leaves of various trees and vine species. They are known to consume leaves of Silkwood as well as maize, creepers, flowers and fruits from rainforests. Weeds and toxic plants like Wild Tobacco and Lantana also make up an important part of their regular diet.

Lumholtz tree kangaroos originally resided in the coastal lowland rainforests of Australia. However, at present they are found mostly in the rainforests of the tropical Queensland, along Atherton Tablelands, and extending to the north up to the Carbine Tableland. They are also abundant along the Malanda Falls Environmental Park, Crater National Park, and Curtain Fig Tree. They are also found in eucalypt forests which are located along the western edges of Wet Tropics bioregion as well as in the riparian vegetation areas.

These kangaroos mostly spend their days crouched on a branch of a tree. They also come down occasionally to the ground and look for another tree to inhabit.

When on trees, these kangaroos are predated on by eagles, owls and pythons. On ground, they are frequently attacked by dogs and dingoes. Parasites are also a source of threat to them.

Lumholtz tree kangaroos have developed several skills that have enabled them to adapt better to their forest habitat. Some of their major adaptive features are mentioned below:

The Lumholtz tree kangaroo does not have any definite breeding season.

The fertile period for the female tree kangaroos (estrous) is nearly around 2 months. During this time, the male kangaroo chooses the female by making soft clucking noises and pawing her shoulders and head. The male also sniffs the female’s cloaca and pouch as a form of courtship ritual. In case the female leaves, the male follows her and keeps on pawing her tail. He then starts to rub his shoulders, neck and head on the female’s cloaca while she raises her hindquarters by supporting the weight of her body on her forepaws. The mating goes on for nearly 20 to 35 minutes and is quite aggressive from the male’s side. A soft, trumpeting noise is emitted by the female during copulation. A successful mating session is followed by a long gestation period of about 42 to 48 days, after which the female kangaroo gives birth to a joey.

At birth, the baby kangaroo weighs just a few grams and it requires less than five minutes for the fetus to crawl with its forelimbs to the entrance of the mother’s pouch. The newborn kangaroo then attaches itself to a teat within the pouch and continues growth for the next 3 months until it is fully developed. The pouch life of a single kangaroo lasts for nearly 9 months.

The Lumholtz tree kangaroo raises only one young at a time. The mother suckles and weans the baby until it becomes independent. The baby opens its eyes at about four months of age. A single young may accompany its mother for more than 2 years. It takes about 4.5 years for the male tree kangaroo to attain sexual maturity, whereas a female becomes sexually mature at about 2 years of age.

The average life span for a Lumholtz tree kangaroo is around 15 years.

The Lumholtz tree kangaroo is listed under the category of “Endangered” by the IUCN.

Check out some of the most interesting facts about these kangaroos:

Here are some images showing these kangaroos in their wild habitat. 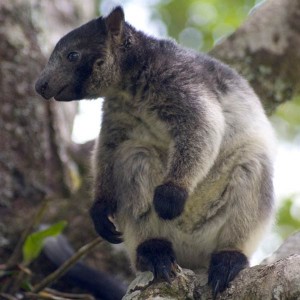