Frilled Lizard or Frill-Necked Lizard is a large lizard species belonging to the Agamidae family. They are native to various regions of Australia and New Guinea. The frill like ruff around the neck of this lizard earned it the name Frill-Necked Lizard. It is also known as the Frilled Neck Lizard and Frilled Dragon. This species is very popular as pets.

They are counted among the relatively large lizards and have a very interesting appearance.

Size: These lizards grow up to 91.4 cm in length. This species displays sexual dimorphism as the males are generally larger compared to the females.

Weight: They generally weigh around 1.1 pounds.

Color: The coloration of different individuals of this species varies greatly. Frilled Lizards living in dry clay filled habitats have more orange, brown and red on their bodies while the lizards from damp tropical regions are dark brown or grey in color. Their bodies are always of a darker color compared to their frill. The males of this species are more brightly colored than the females.

Neck Frill: The large ruff of the Frill-Necked Lizard is made of skin. It measures around 0.3 meter in diameter when spread. They generally keep this ruff folded, lying back against their head and neck. The lizards have long spines made of cartilage that is attached to their jaw bones. These spines support the neck frills. 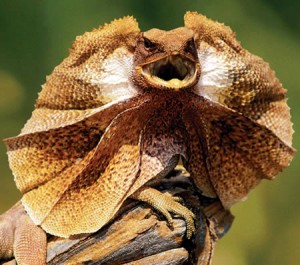 This species is found in the northern regions of Australia and the southern areas of New Guinea.

Like many other lizards, the Frilled Dragons are insectivores. They feed on beetles, cicadas and termites. Both the adult and larvae of this species like to eat moths and butterflies. The animals also prey on spiders, smaller lizards and small mammals. They need plenty of food to survive.

Find out about their behavior patterns:

Predators of this species include owls, eagles, snakes, larger lizards, quolls and dingoes. 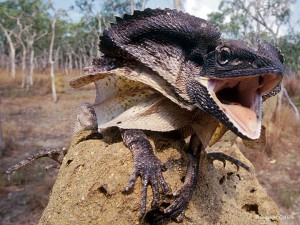 Their adaptive features help them survive in their wild habitat:

Mating takes place during the beginning of the wet season. The mating season continues from September to October.

This species becomes reproductively mature at 18 months of age. The males fight between themselves to select a mate. They bite each other and display their frills during these fights. Frilled Dragons build their nests in sunny areas, 5 to 20 cm below ground level. The females lay 1 to 2 clutches of eggs in these nests between November and February. Each clutch contains 8 to 23 eggs.

Their soft-shelled eggs take 8 to 12 months to hatch into larvae. The gender of the offspring depends upon the temperature of the nest. Extremely high temperatures produce females while males and females are produced in equal numbers when the temperature ranges between 29° C and 35 °C.

The lifespan of this species ranges between 10 and 20 years.

The Frill-Necked Lizards are not poisonous as they do not have poison glands. But their bright coloration leads most enemies to believe in their toxicity. 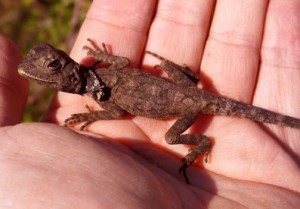 It is considered to be one of the most popular lizards to be kept as pet. This lizard is easy to take care of, requiring low maintenance. The fact that it is not poisonous adds to its popularity as a pet. Here is some information about housing and feeding the Frilled Lizard.

Housing: A 4 feet × 3 feet cage is ideal for a single adult. The tank should contain plenty of tall tree branches and real or artificial plants as these arboreal lizards spend most of their time on trees.

Substrate: It is best to use sand as the substrate for an adult Frilled Lizard. But, the substrate should be paper for the juveniles as they tend to swallow sand.

Temperature: The temperature of their basking area should be kept between 95 °F and 100 °F. The overall tank temperature should ideally range from 75 °F to 80 ° F. Heating products like under tank heaters, heat lamps and mercury vapor bulbs can be used for this purpose.

Lighting: The lizard should be provided with a basking lamp as well as UVA and UVB lights. A 12 hour light cycle should be maintained.

Humidity: It is important to maintain the tank humidity between 50% and 70%.

Feeding: One can feed them with live mealworms and cricket. They can also eat baby mouse occasionally. The adult Frilled Dragons should be fed once a day while the juveniles will eat twice every day. The lizards should be provided with calcium supplements as well.

Temperament: The Frilled Lizards are very aggressive and territorial in nature. Two males should never be housed together as they tend to fight and kill each other.

Handling: When handling the lizard, it should be allowed to grasp the arm in the same manner in which it holds a tree trunk. They become more outgoing and friendly if handled from a very young age. 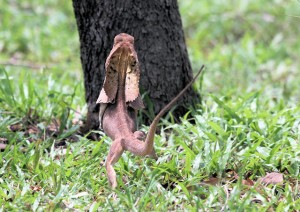 They are counted in the “Least Concern” category by the IUCN.

Here are some interesting facts about this lizard:

Here are some images of this amazing lizard species. 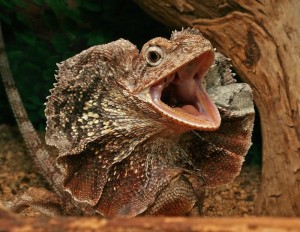 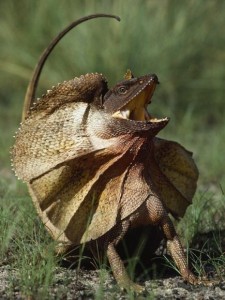