The scientific name for this species of marsupial is “Onychogalea fraenata”.

Here is a brief description of the physical features of these wallabies.

Length: The head-body length of the male wallaby is around 50 to 70 centimeters and that of the female is around 43 to 55 centimeters.

Weight: The weight of both the males and females range between 4 to 8 kg, with the males being slightly heavier.

Color: The color of their bodies is grey with yellow tinges throughout their bodies. A white, bridled line runs down from back of their necks around their shoulders. They also have white underbellies and a black stripe in the dorsal area. A white stripe adorns both cheeks that begin at around the nose and then stretches up to the eye.

Forearms: The forearms are rather small and unspecialized, and have got 5 strongly-clawed digits which are placed around broad palms. The paws are dark in color.

Legs: The hind legs are large and are comprised of muscular thighs.

Tail: The tail is light-colored and is around 450 mm long. It has got a spur or a point that is 3 to 6 mm in length and is partially covered with hair.

Posture: The body posture of these wallabies is hunched, which gives them the appearance of a mini-kangaroo.

Check out the common behavioral traits of the bridled nailtail wallabies:

These wallabies are generally found in 3 isolated locations in Queensland, Australia, namely, the Taunton National Park, the Idalia National Park and the Avocet Nature Reserve.

Bridled nailtail wallabies prefer living in open areas of grassy eucalypt woodlands that are predominated by poplar boxes. They are also seen quite often in dense acacia forests filled with Acacia harpophylla (brigalow) population as well as in transitional vegetations between woodlands and forests. They often build their nests in hollow logs, and take shelter in under fallen timber, grass clumps or tree roots.

These marsupials are often hunted by foxes, dingoes and feral cats.

The bridled nailtail wallaby has developed some distinct adaptive skills that enable it to protect itself from predators as well as to feed itself. The principal adaptive features of these marsupials are discussed below:

Bridled nailtail wallabies can breed throughout the year. The frequency of their breeding depends on the availability of food.

During the mating season, the males compete among each other to attract the females. Generally the males who are more than 2 years old and weigh more than 5600 grams to 5800 grams are more likely to successfully father offsprings. These wallabies require areas having low, densely-packed ground cover in order to mate. The females will conceive when they have got a joey inside their pouch. The developmental timing is arranged in a way that the next baby is born on the day after a previous joey leaves the mother’s pouch permanently. The gestation period is about 24 days. The females give birth to 3 babies in a year.

Usually born in the month of May, a bridled nailtail wallaby offspring is extremely underdeveloped at birth, almost close to the embryonic stage, which is common for all marsupials. They are miniature in size with tiny, rudimentary tail and limbs. The eyes and ears are closed at this stage. Once the umbilical cord is broken, they crawl at great speed up through mother’s fur and enter the safety of the pouch where they are suckled for about 11 months. Pouch life is about 120 days, after which the young emerges out. As soon as it comes out of the mother’s pouch, it is kept hidden by the mother under dense, low vegetation during the daytime resting periods. The areas where the juveniles are hidden are located less than 200 meters away from the mother’s daytime shelter. The mothers return periodically in order to suckle the joeys, especially during the dusk and dawn. The condition of the juveniles once they leave the mother’s pouch is linked with the mother’s health. The female joeys become sexually mature when they are about 136 days old and the males take around 270 days to reach the same stage. However, the males will postpone mating until they become large enough, which may take almost 18 to 24 months.

Bridled nailtail wallabies live for 6 to 8 years in the wild and almost 10 to 12 years in captive care.

The bridled nailtail wallaby was believed to be extinct from 1937 onwards, but then later in 1973, a small population was discovered in Central Queensland. The population of these marsupials was decreased by hunting activities carried out by humans, predation from foxes, dingoes and feral cats, competition for food from sheep and rabbits as well as habitat destruction. Currently, the bridled nailtail wallaby is classified under the category of “Endangered” by the IUCN.

Here are some interesting facts about these creatures:

Check out the images of these adorable wallabies. 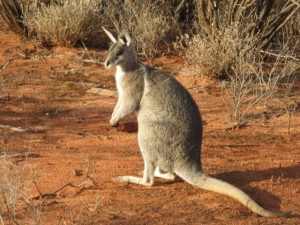 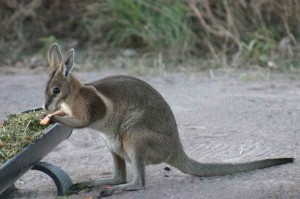