The Australian Magpie is a medium-sized, passerine bird that is native to Australia and Southern New Guinea. These birds are one of the most common Australian birds and are also described as one of the most proficient song birds.  They usually have an array of multifaceted vocalizations.

There are currently nine sub-species of Australian magpie. The original form is called Black Backed Magpie. 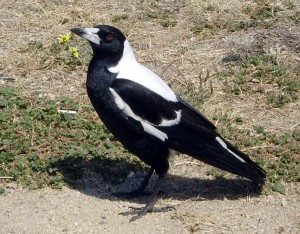 The Australian magpie looks different from the other Australian birds because of their special features.

Color: They are noticeable for their black and white coloration. Presence of bold white patch on their nape is common to all types of magpies.

Feathers: The bird is covered by black and white plumage.

Legs: Legs are quite long and they walk faster than waddles or hop.

The Australian magpie is found in the Trans-fly region of New Guinea. Magpies are widely seen in Australia, Tasmania, and Gibson. Magpies were introduced in New Zealand in the 1860’s. These birds are sedentary and territorial throughout its range. Their range and population has increased a lot and will increase in the future.

Magpies prefer open areas such as grasslands, fields, as well as residential areas like parks, gardens, golf courses, and streets. They nest and shelter in trees but are largely seen on the grounds.

Most of the time, these birds are seen walking from one place to another in search of food. They are also seen in the trees but not very frequently. They prefer walking rather than flying.

Australian Magpies are quite interesting to watch.

The Australian magpie is omnivorous. They prefer food items that are found at or near ground level like earthworms, millipedes, snails, spiders and scorpions. They also prefer insects like cockroaches, caterpillars, ants, beetles, etc. Being a ground feeder, magpies paces open areas methodically searching for foods.

They fluff their black and white feathers while flying from one place to another. They fly within several meters and settle on nearby locations.

Crouching low and uttering quite begging calls are their common signs. They have a beautiful warbling carol which is heard across Australia every day.

Natural predators of magpie include several species of monitor lizard and the barking owl. These birds are often killed on roads or sometimes getting electrocuted by power lines. Some also die because of being poisoned after eating mice, rats with baiting.

They are very adaptive in nature.

Their mating season starts from the month of June and continues till September.

They actually have a long breeding period. The female make nests of their own, which is comprised of a rough basket of sticks in a tree. The female lays 3 to 5 eggs which hatch in within 20 days. Females hatch and rear their unaided nascent born ones to the fledging phase. At this time, male ones take care of the nests. Magpies are known for cooperative breeding. This actually varies from one region to another.

The age at which these birds disperse varies from one country to another. Males are more dispossessed than the females. Many even leave at around a year old.

They are listed in the least concern category by the IUCN. These birds are not threatened, thus are not conservation dependent.

These birds are quite entertaining and interesting in nature.

Here are some images of Australian magpie 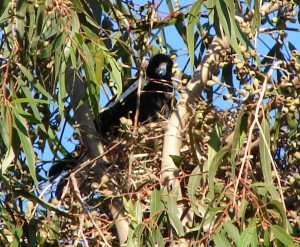 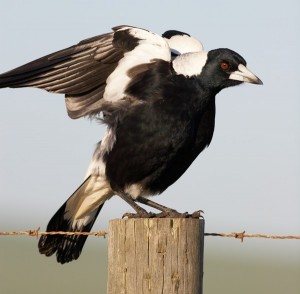