Giant cuttlefish is the largest cuttlefish species in the world. They are found primarily on the southern coasts of Australia. They are quite well-known for their color changing abilities and inquisitive behavior. It is also referred to as the Australian giant cuttlefish.

The scientific name for this species of cuttlefish is “Sepia apama”.

Here is a brief description of these cuttlefishes.

Mantle length: The mantle length of these fishes can go up to 50 centimeters.

Weight: They can weigh up to 10.5 kilograms.

Eyes: The eyes have a very complex structure and are quite well developed.

Mouth: The mouth is parrot-like with a beak, a jaw and a rasping tongue.

Fins: They have got thin fins along their sides.

Gills: They have gills to breath like a fish.

Skin: They have a unique type of skin that can change colors for camouflaging. A dense layer of chromataphore cells line their body.

Cuttlebone: Their bodies are made up of a spongy, chalk-like, internal shell known as a cuttlebone. It is this cuttlebone that gives them their shape.

Heart: These fishes have 3 hearts that pump blue blood.

Check out the primary behavioral characteristics of the giant cuttlefish.

These creatures are native to the southernmost coasts of Australia, from Brisbane, Queensland to Shark Bay, Western Australia, Coral Bay, northern parts of South Wales, and Tasmania.

The giant cuttlefish spends most of its time around oceans, coastal waters, estuaries, seagrass beds, rocky reefs, as well as in sandy and muddy seafloor around the depth of 100 meters.

Giant cuttlefishes are mostly eaten by the bottlenose dolphins, sharks and seals.

The giant cuttlefish has developed several interesting adaptations that enable them to survive in their aquatic habitat, protect themselves from the predators and perform smooth functioning of various tasks such as swimming and mating. The various adaptive features of these fishes have been described below:

The breeding season for these fishes lasts from the months of April to August, i.e. the southern winter. 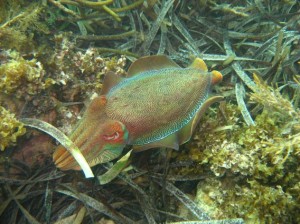 The females are polyandrous, choosing to mate with more than one male in its lifetime. They have more frequently been found to reproduce by using the male genetic material that is deposited in spermatangia than in the sperm receptacles directly. They lay hundreds of eggs which are then attached to undersides of rocks in crevices and coral caves located at a depth of 2 to 5 meters. The eggs will hatch after about 3 to 5 months.

There is not much interbreeding between the populations of giant cuttlefishes. Hence the various populations found in different parts of Australia are not necessarily taxonomically distinct.

Giant cuttlefishes are semelparous creatures; i.e. they mate only once in a lifetime. The female dies soon after mating and laying eggs. They have poor anaerobic capability when compared to most other aquatic invertebrates and absence of food leads directly to catabolism. The female fasts during the breeding months and as they cannot catabolize more than half of their body’s weight, they lose their physical condition soon and die eventually. Loose spawning aggregations are formed throughout their breeding range that rarely exceeds 10 individuals in any single location. The juveniles leave spawning grounds soon after they hatch. Not much is known about their subsequent lifestyle and activities.

The giant cuttlefish stays alive for only 2 to 3 years.

Over the years, the population of giant cuttlefish has dropped significantly. This was due to a variety of factors, namely, habitat destruction due to pollution, predation by dolphins and hunting by humans. The short life span of these creatures was also another major contributor to their lowered numbers. Fishing for giant cuttlefishes was restricted from 1998, as an endeavor to protect them. The numbers of these fishes have increased since then. However, the giant cuttlefish has still been listed under the category of “Near Threatened” by the IUCN.

Here are some of the most interesting facts about these fishes:

Here are some images of these interesting cuttlefishes. 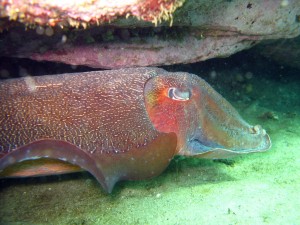 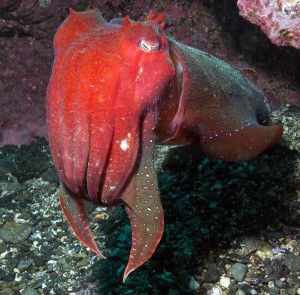